Do you ever have those moments where you’re going about every day life and then it’s like you’re awakened to reality? I was driving down the road the other day and I looked through the rear view mirror into the back seat and I was like- WOE! There are three kids back there! When the Fuzzy French Fried Fritters did that happen? How did I get here? It’s like I woke up one morning and….BANG- fifteen years of marriage, three pregnancies, a couple of houses, a college education and two career changes just happened in a blur of fast forward motion. That’s sort of the way I feel about this whole writing thing. It’s like I woke up in a pile of manuscripts one day and realized I’d written two novels and don’t even remember doing it.

The time has come in this strange and rapid journey to take the next step. I’ve queried my little heart out and attended some small writing conferences – all good steps toward building confidence as a writer- but now it’s time for something a little bigger….THE AGENT PITCH. That’s right, five minutes with a real live agent, make that three agents, to pitch my latest novel.     Am I nervous? Um, yeah, I’m nervous! I’m also giddy, excited and slightly nauseous – all the feelings one might get from bungee jumping. My biggest concern is that I don’t want to waste this opportunity. I want to be prepared. So I have been researching my average sized, slightly curvaceous fanny off to be prepared for what could possibly be five of the most important little minutes in my career as a writer. No pressure.

Here’s what I’ve done to be prepared: I’ve consulted with two very successful published authors about my pitch. One had me re-write it several times to make sure it was concise, SHORT, in close third person and that it remained in that tone throughout. Did I mention that it was short? One paragraph, that’s it. The other author recommended a short pitch line that compares the story to something the agent may be familiar with to catch their attention. Something like, The Titanic meets Twilight. Also, I’m holding a dinner party where I will pitch my book to random strangers, invited by a mutual friend. Finally, I’ve read pitches of familiar stories so I understand what information a pitch should include.

One great resource I found was found on Wow-womenwriting.com. It talks about how agents are people with dreams of making it big too. They come to writer’s conferences with the same hopes that we do: selling books. This site explains what agents dislike about the way author’s handle themselves at conferences. They realize that not all writers are good speakers but become very uncomfortable when someone shakes and cries while trying to pitch a book. Oh, please don’t let me shake and cry…PLEASE! They suggest heavily that authors practice their pitch and don’t decide to change it at the last minute. One of my favorite quotes from the blog was this:

“I wish writers would see the agents more as an equal—when there’s too much desperation in the writer’s eyes, agents tend to de-value them. If a writer is confident, I know that they don’t need me so much as we need each other.”

Maybe you’ve attended a pitch session recently. How did it go? Did you get positive feed back? Representation? Do you have advice for this bungee jumper on her first decent? I’d love to hear from you.

I don’t know about you but when I started this whole journey I was a little embarrassed about it. I was even sensitive talking about it with my husband who has been completely supportive since day one. I thought that people wouldn’t take me seriously, that they would think my ideas of grandeur were nonsensical – a waste of time and believe me writing takes time. Lots and lots of time. Time you would normally use sleeping, going to the mall, exercising or conversing on some type of social networking media.  It took a while, not to take myself seriously because I knew that I wanted to do this, but for me to know that it was okay for other people to take this seriously. One thing that really encouraged me was reading about other authors and the way they described themselves. As I read I realized, hey, that’s me! So if you’re wondering if you are a true writer at heart or if this is just a temporary whim that you are experiencing this might help.

You write in your sleep.

Your friend has a baby and you write his name down for a future character in your next novel.

You’d rather write than sleep.

You sometimes have trouble distinguishing between fiction and reality.

You are constantly looking for elements in your life that identify with the current story you’re writing.

Your friends smile and nod as you talk non-stop about editing your query and the next conference your going to.

You are more excited about going to the children’s literature festival than your children are.

You  get goosebumps and butterflies when you meet a real live published author and suck them dry for any tidbit of advice they can offer.

Your best friends are imaginary.

You have a tingling sensation in your hands from writing too often.

You try things just so you can write about them.

You are starving for criticism just so you can get better.

You’re determined that, even if it takes until you’re 108, you will continue working on your writing until it’s published!

Perhaps you identify with most of these. If so, you might just be a real, bonified writer! Please share some of your own, “You might be a writer ifs…” 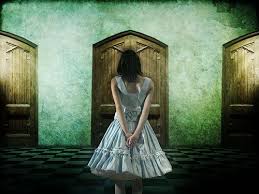 What a day we live in! Options are as plentiful as the calories in a Big Mac; processes are easy and deliver instant results and information is free to all! This is all very fortuitous and opportunistic for this generation of writer’s, no?

The last writer’s conference I attended was a mix of author’s that were new to the game and seasoned veterans (heavy on the latter.) The authors who walked uphill both ways on the path to publishing (in the snow with no shoes on) didn’t seem to appreciate today’s new-age methods of publishing.

To be honest, I can see their point. In their day author’s WROTE  books – no spell checker, no backspace key- they dripped blood, sweat and tears onto real paper! When they wanted to research something for their books they had to get up off of the couch and go to the library and use that little card catalog thingy! Publishing was even more tedious. Online query forms didn’t exist. No, there were reams and reams of paper sent out with hundreds of dollars of postage. Sounds like lots of disadvantages, right? It wasn’t all languishing and lament, though.

“Authors of old had one gleaming advantage over today’s prospective penmen: Fewer authors actually followed through with the process due to its rigor, which increased their chances of winning the prize of publishing.”

Now you’re thinking, “Well, that was a happy story. Tell me more.”  Don’t worry, there are advantages for the whipper snappers too. It just involves a lot of research and knowing which path is best for you. If you’re reading this you’ve probably gotten as far as asking yourself THE QUESTION – Why am I writing a book? Your answer might be: to make money; so my voice is heard; to get my message out; because it’s on my bucket list or I don’t know, it’s just this blazing passion inside I have to fulfill. That last one is me. I’m not dying to roll in fields of cash (though if it happens I won’t complain).  I don’t have a burning message that I want to preach to the masses.

I just want to create and entertain and I want to be regarded and validated as an author.

Understanding my motive helps me choose my publishing route and I’ve chosen the traditional route of searching for an agent to represent me as an author.Landing an agent would be affirmation that my writing is ready for the public. Now, we know many authors – Steven King among them – had to query agents for just about ever to find someone who would affirm his craft. So be ready to stay the course if you choose this method.

Once an author is published through the traditional route, however, they have established themselves in the literary community and publishing becomes a much easier process.  I would say that this is the one major advantage to the traditional route that self publishing doesn’t provide. Another advantage is that there is no cash put out by the author, or there shouldn’t be. Never ever, ever pay an agent to represent you. They get there’s when they sell your book and good agents sell books. In fact, many agents give a stipend upon signing with them that doesn’t have to be paid back if you don’t sell any books. If you take the stipend, though, you don’t get a pay–out until you’ve sold the amount of  cash you accepted for signing.

The number one headache has to be the query process. If you’re not familiar with this constant kick to the gut I shall enlighten you. Some agents, not all, accept non–solicited manuscripts from newbies and veterans alike – again some agents, not all. Some only accept from established authors. To query an agent, you send them letters in a specific format that tells them about your experience as a writer and what your manuscript is about. Some agents request a sample chapter or two of your manuscript as well. Lots of research should go into what each agent is looking for and whether they accept non exclusive submissions (submissions that are sent to more than one agent.) Personally, unless it’s your dream agent, I don’t send exclusives because as one author put it, you’d be 108 if you had to send each query out individually and wait for the response. Speaking of waiting, most agents take at least four weeks to get back to you and sometimes eight but I’ve received responses in less than an hour before.

What about those responses? They are rarely personal. Sometimes it’s hard to tell but I’m not sure I’ve ever received anything but a form letter and so far they have all been rejections. Be ready for rejection but don’t let it sway you. As Dory would say, “Just keep sending. Just keep sending, sending, sending!” To kill a Mocking Bird was re-written nearly a hundred times and went to countless agents before being published. I guess what I’m trying to say is : this method of publishing takes stick–to–it–iveness (not a word) but the accreditation associated with it is worth it in the end.

I could write a book on the methods and resources involved with pursuing an agent. I wouldn’t be the first one if I did.  Instead, you can check out the link I’ve provided below to many of my favorite query resources if this is the path you plan to take. There is a culmination of great information on how to build your query and what to look for in an agent. Happy hunting! You can do it!

Query Tracker.net This is a great resource for finding agents based on genre and location. It gives valuable statistical information on how agents respond to different query methods and provides for comments by authors on the process.

Writers Market – If you aren’t published and you’re in the query process this piece of literature is a must-have. You can download the book online at Amazon.com.