Most of us have been there at one point or another. You’re scrolling through your finished manuscript, basking in the glory of your own work, when that rocket of fear shoots from your stomach to your throat. The formatting is all off. @#%*$% THE FORMATTING IS ALL OFF!!!

And that’s just one of the many problems that could occur when you’re putting fifty to a hundred-thousand words on paper. We’re writers. We want it to be perfect. So we come up with our own little hacks to make our manuscripts shine.  What if we shared our writerly hacks with one another. We could take over the world! Or at least the little worlds we create. So I’ll start, then you add yours in the comments below.

Here are six hacks I use while writing:

HERE HERE HERE: I have three kids. Two of them are prepubescent boys, so it’s safe to say I’m interrupted while writing on a pretty regular basis. There’s nothing worse than losing your place. You only get so many minutes to write in a day, and you don’t want to spend it scrolling through your MS trying to find where you left off, and it’s unrealistic to think that you will write the page number down each time child A decides to beat the tar out of child B. So, I came up with a system. When I come to the end of a section, I type three little words: HERE HERE HERE. It’s unlikely that I’ll ever type those words in that sequence ever in my manuscript, so when I want to find my spot again, I type HERE HERE HERE into the search tool, and it takes me right to where I left off.

BACKSPACING TO RENEW FORMATTING: Formatting. It can be a booger. I mean, thank goodness for it, but when it’s off, it’s sometimes hard to get to the bottom of why. When I notice that a new paragraph isn’t doing what it should, I will put my curser at the front of the paragraph and hit backspace until the new paragraph merges with the old one. Then I hit enter. The new paragraph will take on the formatting of the previous, hopefully correctly formatted, paragraph. 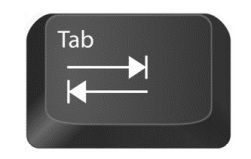 DON’T USE TABS: I recently learned this the hard way. I typed an entire manuscript in DOCs just because it was convenient to write on the run, and I love the automatic saving feature. But I got a little lazy performing the hack above, and I used the tab key when my paragraphs weren’t indenting like they were supposed to. When it came time to save it as a Word doc. for the agent I was sending it to, I noticed some paragraphs were double indented. I tried removing all formatting (which in turn took out italics for the entire MS) and using the Paint Format feature. But APPARENTLY tabs are not included in formatting. So, I had to take out every single tab by hand! Learn from my mistakes people. Don’t use the evil tab button!

TEXT TO SPEAK APS: One of the biggest reasons we are our own worst editors is because of that little block in our brain that doesn’t allow us to read our own mistakes. We read missing words where they should be, even though they aren’t there. Someone else who doesn’t know what it’s supposed to say will be more likely to pick up the error while reading it. I said READING it. There’s a difference in listening to it though. Now, don’t get me wrong. We still need other people to look at our work, but we can be so much more effective in cleaning up our manuscripts by using text to speak apps to listen to them. Don’t read along. Just close your eyes and listen. Or do the laundry, whatever. Keep your manuscript open in another window on your phone or computer and push pause and edit while you listen. It’s also really cool to hear your own words read to you. The Google Play Store has some free apps that work great. I recommend NaturalReader.com for your PC or laptop. It’s one of the few readers that actual says contractions correctly.

SEARCH AND REPLACE: Most people know about this feature already, but there are few aspects of using it (both good and bad) that maybe you haven’t thought of. There are the simple uses like when you decide to reinvent your relationship with your MC (as I suggest in last week’s blog, REVISION GIRL) and you change her name. You simply type the old name in under replace and then put the new name in under replace with. Be careful though. If you add an extra space after the “replace with” word, it will show up every time that word appears in the manuscript. (Learned this the hard way.) And if you don’t specify your search to whole word only, it will replace every word with that sequence of letters in it. For instance, if you say replace Tom with Tim the word atom will become atim. (Also, learned the hard way.)  If you’re careful while you use it, the tool can be very handy. Say you want to replace a certain word, but only in the second half of the manuscript. You can specify your search to “from this point on.”

YOGA BREAKS: In the summer of 2015, I did a lot of writing. Like, get-up-only-to-pee-and-eat lot of writing. I’m nearly six foot tall with a long torso. This is not recommended for my body type, or anyone’s really. Well, maybe a sloth’s. Needless to say, my back went out. As in, I-can’t-walk went out. It was terrifying, and I never want to experience it again. And that’s how Yoga Breaks were born. At scene changes, I get up and do a few simple stretching moves: downward dog, sun salutation. I was actually more productive because of increased blood flow, and my back stayed strong.

So, what are your hacks? I know you have them. None are too silly. Come on, I shared “HERE HERE HERE” with you!

She edits full manuscripts at the speed of light. She rewrites entire chapters in a single setting. She finishes her beta swaps before her promised dead lines. She lives off of coffee and doesn’t need sleep. She’s REVISION GIRL. 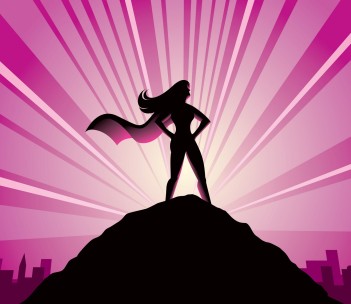 Not all revisions feel this easy. Some are like that mountain of laundry staring at you from across the room. A chore. But some revisions…some of them are more fun than writing the manuscript the first time. When we’re working on THOSE revisions, everything seems to come easier. The words seem to write themselves. So what makes one revision easier than another?

3 things. The reason. The story. And the setting.

A better manuscript is a better chance at getting  an agent. Period.

The reason. This is a big one and can really effect your excitement and attitude toward the revision. This is one that we don’t  often have control over. Are you revising because you’ve  received  an R&R from an agent? Excitement  levels high! Or is it because you got negative  feedback  from a contest or a CP (who loves you enough to tell you the truth)? The reason can be a joy kill or a motivator. You can take control by making the improvement of your MS your reason. A better manuscript is a better chance at getting  an agent. Period. So, for this one, change your focus.

Show up at your MC’s doorstep with flowers and introduce yourself as though this is the first time you’ve met.

The story. Sometimes we start out excited about our stories, and somewhere along the journey, the love peters out for whatever reason. Maybe we hate what the characters have become. Maybe we don’t  have a creative way of resolving the conflict, or we’ve  just plain and simple been working on it for too long.  Here are some ways to reignite those flames for your MS. Take a break. Step away. Work on something  else. Or, if there’s no time for that, change character names and some aspect of their personality so you see them in a new light. Sort of like reinventing a relationship with a spouse. Show up at your MC’s doorstep with flowers and introduce yourself as though this is the first time you’ve met.

Make your writing time your secret little indulgence you can’t  wait to get home to, and it will show in your writing!

And finally, the setting. This can be anything  from the room you’re writing in, to the time in your life you are in. Personally, I need a quiet comfortable place. I’m not a big desk writer. I have a big ugly beat up brown love seat in my bedroom. That’s my spot, yo. It’s where the magic happens. And if my husband decides he wants to watch TV, I bust out the Bose sound canceling headphones and go to town. Time is another thing, though. Not being able to write can cause frustration that can show up in your writing. Scenes can become rushed, and the quality can become affected. Here are some suggestions. Late night writing. It’s  my secret quiet time, and it feels adventurous to be up late with your music pumping. I take a power nap after work so I don’t feel the repercussions the next day. Maybe you’re a morning  person. Good for you, freak! Just kidding. I love you. So, do it in the morning then. And music! This part has made such a difference for me, lately. I’m  a lyric free girl myself, so I’ve  found some killer movie soundtracks to write to. 8tracks.com is an awesome resource with hundreds of free albums to pick from!  Inception and Interstellar are some of my faves! Make your writing time your secret little indulgence you can’t  wait to get home to, and it will show in your writing!

What about you? What are some things that effect the quality  of your revisions? How do you get your revised on?